How to Hunt a Whitetail Scrape Line When asking deer hunters when their favorite time of year to hunt occurs they will often say pre rut. Some even say that it is those few days around Halloween. This is mostly due to the fact that bucks are beginning to be more active in anticipation of the upcoming rut. One of the common methods of hunting this time of year is hunting scrapes, to be more specific, hunting scrape lines. If one has never hunted near a scrape line they may be missing out on a good chance to harvest a trophy buck. Here are a few tips that could increase those chances when done right. What is a Deer Scrape Line?

A scrape is made by a whitetail buck, a buck will paw a circle on the ground, usually under an overhanging branch. Once the scrape is made, a buck will urinate in the fresh dirt then rub his head on the overhanging branch to leave scent from a scent gland that is located on top of his head. Both scent applying gestures is done to let other deer know that he is in the area. These scrapes will then be visited by other deer, and will even be used by other bucks. However, a scrape line is done by one particular buck usually between a bedding area and feeding area, it is called a scrape line because it will usually consist of a multiple scrapes in a series of about 50 yards or more. A buck will make multiple scrapes along the edge of these areas trying to catch the attention of does that are near time to breed.

1. When Does a Buck Scrape Occur? A scrape line is typically formed around mid October and continues through the first of November, varying from state to state. A scrape line is normally made during the seeking phase of the rut, which is prior to does coming into estrus.

Tip: Do not mistake normal scrapes for a scrape line. Bucks will make scrapes from late September through November, however, as a rule of thumb scrape lines occur in most areas around mid October.

2. When do You Hunt a Scrape Line?

Tip: Some hunters will use a game camera such as the Stealth Cam 4K Game Camera set on a video mode over a scrape line. This will help to determine what buck is visiting the scrapes, how long he is working the scrapes, as well as how often. Remember: Bucks are working their nose when using scrape lines, so make sure to use caution and not leave human scent when setting up cameras.

3. Using Scents to Attract Bucks on a Scrape Line

As mentioned before, a scrape line is made on the boundaries of well traveled areas while a buck is checking the area for does that are ready to breed.  Below are two examples of different scents on the market that work great to attract bucks.

Aerosol Type Scents: Using deer scent such as Buck Bomb XTRUS Deer Attractant in or near the scrapes is a great way to lure a buck into thinking does are near estrus. Buck Bomb Extrus is a aerosol formula that consists of 5 times the estrogen level found in a does peak estrus. Being in a aerosol form allows the scent to travel downwind covering a large area. Spray this type of scent in the real scrape or use when in a treestand to allow the scent to broadcast throughout the air.

Liquid Type Scents: Using liquid scents also works well on scrapes. Wildlife Research Center's Golden Estrus Doe Urine with Scent Reflex Technology works great by pouring it into a real scrape, this represents a doe that has urinated in the scrape and shows that she is in estrus. Golden Estrus is engineered to be stronger allowing a long-lasting scent that will last an extended period, it also comes with a scent wick to hang on the licking branch giving 2 different sources of scent in one scrape.

Tip: Make a mock scrape. This is where a "scrape" is made near one of the real scrapes made by a buck. Usingsomething besides boots, such as a stick, scrape out an area under a licking branch then pour a scent such as Wildlife Research Center Golden Deer Scrape. This is a blend of scent that is perfect for mock scrapes featuring doe and buck urine. By making a mock scrape it will fool a buck into thinking another buck has invaded his area trying to lure does away from him. 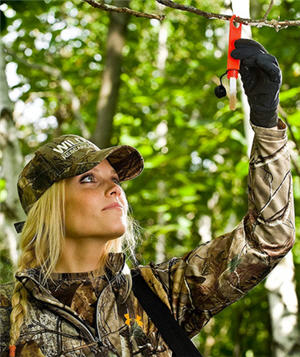 Tip: Think You're an Expert at Rattling Whitetails? Take This Quiz and See!

Tip: The Wildlife Research Quik-Wiks Scent Dispenser is designed to dip all the way down to the bottom of a 4 oz bottle of scent. The scent dispenser hangs easily on branches or twigs, and has a convenient re-sealable , zip lock bag so you can use them again.

The pre rut can be one of the most exciting times to be in a treestand. There is no better assurance of bucks being active in a hunting area than that of finding a scrape line.  Not only is this an exciting time to hunt, this excitment can be heightened by adding the scent of bucks and does. If done right the chances of taking home a mature buck increases drastically.