Shirt pulled up to expose his belly and plant in hand, 10-year-old Curt used a circular motion to rub the plant over the surface of his skin.

The little boy was my genius cousin who was scientifically, in his mind, testing his theory that he was not allergic to poison ivy. The copy cat was me.

Five-plus decades later, I remember the agony I suffered and still cringe at the thought of the experience and how I got through my allergic reaction to the plant.

Avoidance isn't always easy though ... especially for the outdoorsmen. We hike trails to trek where few others dare, creep the wilds to garner a glimpse of a rare bird, hunt the deep woods for wild game, and portage our canoes and kayaks through thick terrain. Because we often put ourselves at risk by paying more attention to our pursuits than plant life, knowing how to quickly identify poison ivy and other pesky poisonous spring / summer / fall plants. Most important is what to do when we encounter it, can help prevent you from an allergic reaction to the dang plant! Be prepared.

Remember: LEAVES OF THREE, LET IT BE

Click here to see a larger view of the spotting poison ivy guide. 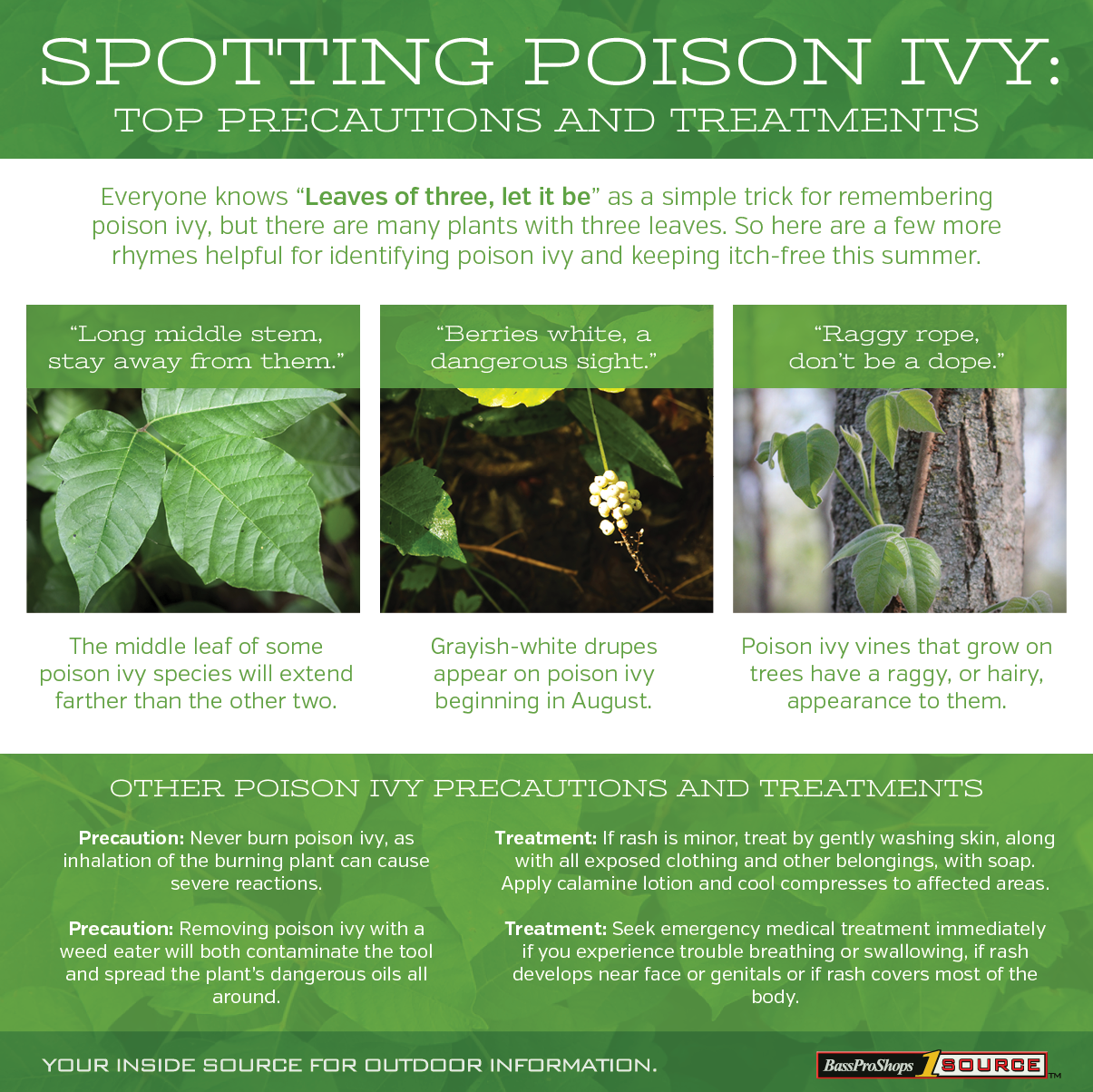 Causes of Poison Ivy Rash and Other Facts

1. The oil in poison ivy that causes the allergic reaction (rash, swelling, blisters) is urushiol.

2. One quarter of an ounce of urushiol is all that is needed to cause a rash in every person on earth. 3. Enough urushiol to cover the head of a pin can cause 500 people to itch.

4. Specimens of urushiol several centuries old have been found to cause dermatitis in sensitive people. The normal time frame for  urushiol oil to stay active on any surface, including dead plants, is one to five years.

5. Urushiol oil on clothing and gear and can transfer to skin again and again. Boots, clothing, sleeping bag, tent, backpack — they can all be carriers. Washing, often several times, is necessary to remove the oil.

6. Urushiol becomes airborne when droplets are suspended on particles of smoke. Burning poison ivy plants can send microscopic droplets of urushiol into the air and into human airways and eyes.

7. Lawnmowers and trimmers also can cause the oil to become airborne.

8. While animals don't react poison ivy, they can spread the oil to humans. Many people are exposed by their pets.

9. Urushiol has to penetrate the skin to get to the dermis, so thin skin shows symptoms before thick skin does.

10. The rash, blisters and swelling are a complex immune response, the body’s way of fighting off the oil invasion.

11. Rash blisters are not contagious and don’t contain urushiol. Scratching may seem to spread the rash, when in fact the new area simply took longer to respond to the exposure.

12. Some individuals are immune that’s true — especially youngsters — thus Curt’s rash avoidance. But there’s a huge caveat. The majority of people’s immune systems react to urushiol after several exposures. Most all become allergic by their teenage years.

If you're exposed to poison ivy, the first thing you should do to lessen the effects is to thoroughly wash the affected skin with lukewarm, soapy water.

Looking for more information about poison ivy? Check out these outdoor and poison ivy articles at Bass Pro 1Source.

7 Reasons You Should Use Solar Power to Charge Your Electronics

How to Select a Wilderness Campsite That’s Safe and Comfy

Laurie Lee Dovey, who is the Executive director/CEO of the Professional Outdoor Media Association (POMA), is a highly awarded writer and photographer, marketing and media consultant, and speaker.

An avid angler, hunter, sport shooter, and on and off full-time RVer, Dovey has been writing about the traditional outdoor sports for more than 30 years. Her adventures take into the wilds an on the…