How to Skin Squirrels: Step by Step Picture Guide 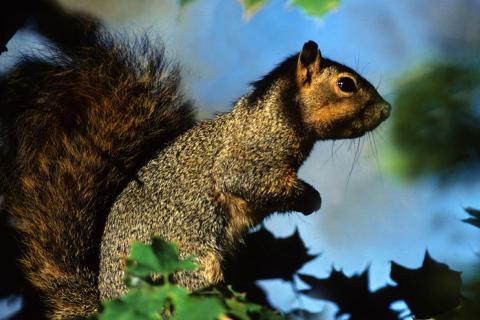 All furred game – big or small – should be opened up to begin cooling as soon as possible after it’s taken. In the case of hunting small game, like squirrels, it makes sense to skin and gut the animal completely right away. Especially with squirrels, the sooner you get to them, the easier they are to clean.

Tools you'll need to process squirrel with links to purchase in case you need to restock your field dressing kit.

Begin by laying the squirrel on the work surface, belly down. Lift the tail with your non-cutting hand and with a sharp knife, make horizontal cut through the skin that extends on to the rump on both sides. Pick up the squirrel in both hands and break the tailbone, but be careful to not tear or cut the skin above the tail.

Tip: How to Still Hunt Squirrel as Deer Season Winds Down Using the knife, begin to skin up the squirrel’s back creating a flap of skin about two inches wide still connected to the tail. 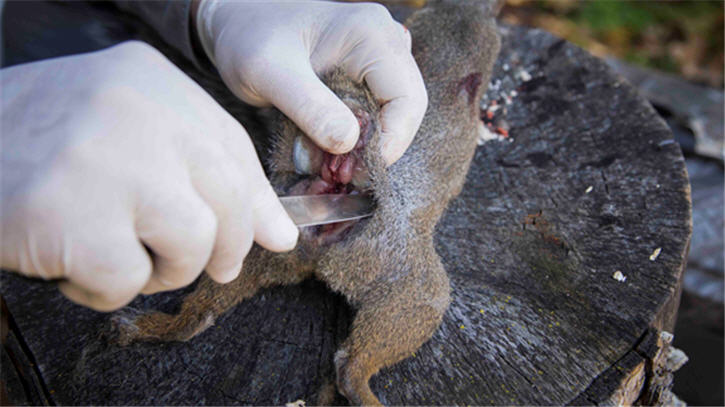 Make a small cut under the skin down the top of each back leg to begin to loosen that hide as well. Continue to skin that flap up the back to about two and a half or three inches from the first vertical cut. Pinch and lift up the skin at the point you located on the breastbone.

STEP 6: Use Your Muscle Now comes the part that takes a little bit of muscle. Lay the squirrel on the ground on its back, and put the heel of your boot on that flap of skin below the tail. The base of the tailbone will catch on the inside of your heel. Get a firm grasp on those hind legs and pull slowly straight up! Keep pulling until the skin comes off around the front legs and right off the head. Grab the squirrel around the body behind the front legs with your weak hand, and with your strong hand grasp the skin beneath each rear leg and pull it toward you and off the hind legs. Next cut off the head if it is still attached, and then you can quickly remove the feet if you have a game shears with you. Use your fingers to make the opening larger. Then with your knife blade turned up and being careful not to cut any entrails, cut the squirrel open all the way up through its chest. Get two fingers in front of the membrane in the chest cavity and pull the entrails all the way back and out the rear of the squirrel in one motion. If you have water available rinse the cleaned squirrel inside and out. Put it in a plastic bag and get it on ice as quickly as possible.