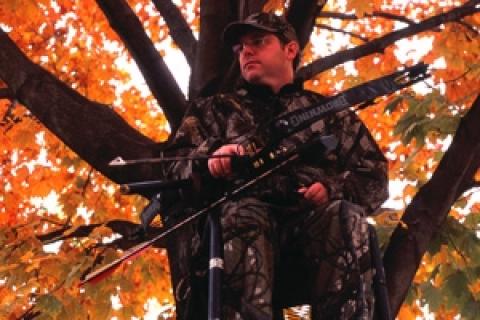 Camouflage hunting clothing is hugely popular across North America, especially among bowhunters and those who hunt waterfowl, turkeys and predators. Waterfowl and turkeys are able to see colors, while predators have very sharp vision, making effective camouflage a necessity when pursuing such quarry. Although most big game species have very limited, if any, ability to see colors, the necessity for bowhunters to get extremely close to their quarry requires camo in order to break up the hunter's silhouette or outline and blend in with the surroundings. But all camo is not the same, and it is possible to make a wrong choice in terms of your camo pattern.

All camo patterns are essentially either all-purpose varieties that are meant to blend in sufficiently under a wide range of conditions and situations, or those that are specialized and are meant to closely match certain specific environments.

All-purpose patterns — and there are number of very fine ones available — typically use detailed and contrasting foregrounds combined with large, open or blurred backgrounds, often in layers, to achieve a pattern that simply works under a variety of circumstances. These patterns are as useful in the turkey woods of the East as they are in the Rocky Mountains of the West. Special-purpose patterns, of which there are literally dozens of regional varieties available to match just about any environment, either mimic local terrain, such as those that utilize light colors and shadows for the Great Plains, or specific situations, such as a skyline pattern for hunting out of a late season tree stand. The differences between these two families of camo can be equated to getting by with just one fishing rod; yes, it can be done and it will suffice for just about everything, but it's not the best choice for every situation.

But a poor choice of camo can actually make you appear quite visible. For instance, while a snow camo pattern is great for hunting in snowy conditions, it would stick out like a sore thumb in a southern duck marsh, where a pattern comprised of light colored grasses and reeds would be a far better choice for hiding from the suspicious eyes of wary mallards. Similarly, and this is a mistake that many hunters make, wearing a camo pattern that is predominantly brown for hunting turkeys in late spring or bowhunting for whitetails during the early archery season are mis-matches that can easily be avoided. Look around and you will see an abundance of green surrounding you at these times. Save the brown camo for when there are no leaves on the trees and instead wear a pattern with lots of greens and shadows.

There can also be situations when the best camouflage is a lack of it. Savvy bowhunters that hunt of out portable ground blinds have learned that the best way to hide in the dark shadows of a pop-up blind is to wear black rather than camo. Similarly, if you are hunting in complete snow cover, such as for late season waterfowl, a simple all-white coverall is the best choice.

And don't be afraid to mix-and-match. If you are hunting coyotes in winter with snow on the ground and you are sitting with you back against a tree, snow camo pants will help you blend in with the ground, but a brown-based multi-purpose camo coat will better blend with the tree than would an outfit entirely of snow camo.

A great way to check how well your camo actually blends with your surrounds is to have a friend take a photo of you in black and white (many digital cameras have this feature) to approximate the vision of many big game animals. Or you can film yourself with a video camera and then play it back on your TV in monochrome mode (many TVs have this function).

Of course, even the best camouflage still requires that movement be kept to a minimum, and while any type of camo is probably better than no camo at all in most situations, by matching your camo pattern to your surroundings as closely as possible, you will maximize its effectiveness and help ensure that you remain hidden from prying eyes.

I might suggest solely beneficial in addition to trusted facts, and so find it: Tampa Exterminator

The best article I came…

The best article I came across a number of years, write something about it on this page. Orlando Exterminator

Great info! I recently came across your blog and have been reading along. I thought I would leave my first comment. I don’t know what to say except that I have. Termite Treatment Tampa

At this point you'll find out what is important, it all gives a url to the appealing page: Orlando Kitchen Remodeling

These you will then see the…

These you will then see the most important thing, the application provides you a website a powerful important internet page: australia temporary phone number

So lot to occur over your…

So lot to occur over your amazing blog. Your blog procures me a fantastic transaction of enjoyable.. Salubrious lot beside the scene. 안전놀이터

Acknowledges for penmanship such a worthy column, I stumbled beside your blog besides predict a handful advise. I want your tone of manuscript... رقم مكافحة حشرات

I wrote about a similar…

I wrote about a similar issue, I give you the link to my site. رقم فني تكييف

I use basically superior fabrics : you will discover these products by: مقوي شبكة 5G

Within this webpage, you'll…

Within this webpage, you'll see the page, you need to understand this data. كراج متنقل امام المنزل

Your texts on this subject…

Your texts on this subject are correct, see how I wrote this site is really very good. رقم كهربائي منازل

When decorating an apartment…

When decorating an apartment, choosing a theme is a great way to coordinate the types of decor you will buy from the bedding to the art. Here's our list of the best modern apartment decor ideas. If you're looking for other themes, we have ideas from pink and rustic to blue and bohemian. apartment humidifier

This content is simply exciting and creative. I have been deciding on a institutional move and this has helped me with one aspect. بنشر

It is very good, but look at…

It is very good, but look at the information at this address. hasta yatağı kiralama

You ought to basically…

You ought to basically fantastic not to mention solid advice, which means notice: vinç kiralama

On this page you can read …

On this page you can read my interests, write something special. sepetli vinç kiralama

At this point you'll find out what is important, it all gives a url to the appealing page: elektronik sigara

Gives you the best website address I know there alone you'll find how easy it is. kulaklı zincir

Hmm… I interpret blogs on a…

Hmm… I interpret blogs on a analogous issue, however i never visited your blog. I added it to populars also i’ll be your faithful primer. Canninghill Piers

I am always searching online…

I am always searching online for storys that can accommodate me. There is obviously a multiple to understand about this. I feel you made few salubrious points in Attributes moreover. Detain busy, awesome career! beer variety packs packaging machine

At this point you'll find out what is important, it all gives a url to the appealing page: homeopathy chiropractor

I read this article. I think…

I really appreciate this…

I really appreciate this wonderful post that you have provided for us. I assure this would be beneficial for most of the people. UFABET

So it is interesting and…

So it is interesting and very good written and see what they think about other people. health fashion

These websites are really…

These websites are really needed, you can learn a lot. kratom

So it is interesting and…

So it is interesting and very good written and see what they think about other people. Pollen Collection

On my website you'll see similar texts, write what you think. https://www.ibuyfans.com/instagram/

Awesome dispatch! I am…

Awesome dispatch! I am indeed getting apt to over this info, is truly neighborly my buddy. Likewise fantastic blog here among many of the costly info you acquire. Reserve up the beneficial process you are doing here. 醫療用品

Initial You got a awesome blog .I determination be involved in plus uniform minutes. i view you got truly very functional matters , i determination be always checking your blog blesss. komopoker

I invite you to the page where you can read with interesting information on similar topics. 메이저카지노

Beaver says I also have such interest, you can read my profile here: дамски обувки

This is very interesting…

This is very interesting content! I have thoroughly enjoyed reading your points and have come to the conclusion that you are right about many of them. You are great. Bathrooms maidenhead

I can recommend primarily…

I can recommend primarily decent and even responsible tips, as a result view it: Avukat

It is quite beneficial,…

It is quite beneficial, although think about the facts when it reaches this target. https://www.unitedluxuryshop.net

Mmm.. estimable to be here…

Mmm.. estimable to be here in your report or notify, whatever, I repute I should moreover process strong for my have website want I play some salubrious further updated busy in your location. online pet supply

I personally use them exclusively high-quality elements : you will notice these folks during: Xero Singapore

On my website you'll see similar texts, write what you think. rummy wealth

This is exciting, nevertheless it is vital for you to visit this specific url: expanded metal singapore

For many people this is the…

For many people this is the best solution here see how to do it. Car Crash attorney McAllen

On this page, you'll see my…

On this page, you'll see my profile, please read this information. 搬家公司

How to do Netgear Orbi Login easily

To begin with, the Netgear Orbi login process, use the default gateway Orbilogin.net. You can also take the help of the default IP address. You must use a compatible browser only and check if the devices are receiving a sufficient power supply. Got any doubts or confusion? Have a chat with our tech support team now.

How to do arris router login?

You can execute the Arris router login process with the help of the default IP address. After opening any compatible browser, fill in the default gateway in the browser's address bar and press enter. When the login window pops up, you will be prompted to key in the default login credentials and hit the Login button. If you have any doubts or confusion anywhere, chat with our experts at the end.