When I first started big game hunting, most serious hunters handloaded their own ammunition. This was because the quality of the factory-loaded ammunition that was available was not always of the highest grade, and the selection of calibers, along with bullet weights and styles, was not the greatest either. Handloading is still very popular, especially for those who do a lot of shooting and are looking to save money by reusing the brass shell casings and buying the other components of ammunition in bulk. Fortunately, the quality and variety of factory ammunition available today is no longer a problem. Here's what you need to know to select the right ammunition for hunting. For the purposes of this discussion, we will be looking at only rifle ammunition.

What Caliber is Your Rifle?

The first consideration when buying ammunition is the caliber - or more precisely the cartridge. "Caliber" is generally the measure of a bullet's diameter; the higher the caliber, the bigger the bullet, and generally the larger the game it can be used for. However, caliber is just one characteristic that makes up a rifle cartridge. The "cartridge" is the overall name of the ammunition. It takes into consideration the length, diameter, and all other specifications of the round.

It is critical that you use the exact same cartridge that is stamped on the barrel or the receiver of your rifle. Using any other cartridge can result in serious or even fatal injury to you. At the least, it will cause damage to the rifle. For example if it says, ".300 Win. Mag." you must use .300 Win. Mag., NOT .300 Wby. Mag. or .300 Win. Short Mag. or .300 Rem. Ultra Mag.

Below is a chart to help you match up the caliber with the type of hunting you are plan to do. 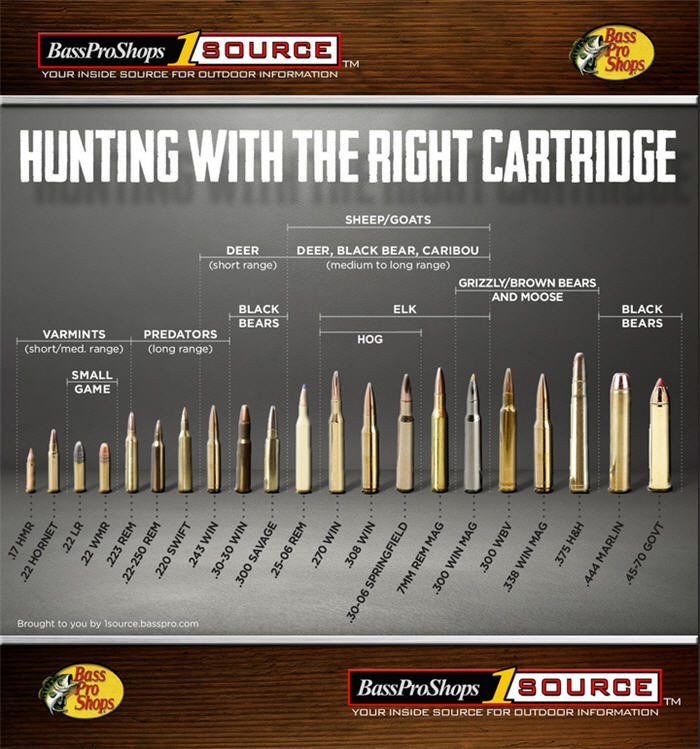 What Style of Bullet Should You Use?

The style and construction of a bullet are also important considerations. If you shoot a lever action rifle with a tubular magazine, your bullet style will usually be limited to bullets that have a round or flat nose to prevent a chain reaction detonation of the rounds that are lined up tip-to-primer in the magazine. However, most bullets feature a pointed or "spitzer" tip, for increased ballistic efficiency. The main exception to this is large-for-caliber bullets, such as the 220 grain bullet for a .30-06 Springfield rifle. Such bullets often feature a round nose as well, as they are generally designed for use at short ranges or heavy cover.

The construction of a bullet will depend on the size of game being hunted. Varmint hunting requires a bullet with a thin jacket and soft core, for rapid expansion and fragmentation inside these tiny targets. At the other end of the spectrum, bullets designed for the largest of North American wild game feature a thicker or tapered jacket, often bonded to the bullet's core. Thicker or tapered jacket provides for deep penetration and controlled expansion while retaining most of the bullet's weight. For deer-sized game, bullets are generally constructed with a softer point, as these animals lack the thicker hides and tougher bones of moose and bears.

Many of the most popular bullets today also feature some sort of polymer tip atop the lead slug. These tips help to prevent deformation or damage to the soft lead bullet that can result from repeated loading and unloading in a rifle's magazine and chamber, which can then hurt the bullet's ballistic efficiency and performance.

TIP: Click here to Enlarge+ How to Choose the Best Bullet Design chart

What Kind of Ammunition Grade Should You Use?

Premium grade ammunition usually carries a premium price, but it is generally well worth the added expense. These loads generally utilize higher-quality components, including the brass, bullets, powders and primers, and are loaded to strict specifications with tighter quality control tolerances. The result is ammunition that is generally more accurate and consistent from shot to shot. When you consider the amount of money we spend to hunt big game, and that we might only fire a few rounds a year, a few extra dollars spent to buy the best factory ammunition available is a good investment.

Should You Consider Specialty Ammo Loads?

In recent years, ammo manufacturers have come out with some new specialty loadings as well. Reduced recoil loads have become popular with lighter-built shooters, younger shooters and anyone with a heightened sensitivity to recoil. These loads feature special powders and bullets to achieve hunting performance on deer-sized game out to 200 yards, with much less than standard recoil.

At the other end of the spectrum, hunters who are not particularly sensitive to recoil and who want the maximum performance available for a particular cartridge can choose from new "hyper-velocity" loads now being offered. These loads offer faster velocities than standard loads, resulting in flatter trajectories, more energy, and better penetration.

Lead-free bullets like the Nosler e-Tip Lead-Free ammo are also gaining popularity. They are legally required in certain areas, while other hunters prefer them due to concerns about lead fragments in their venison. Fortunately, these all-copper bullets tend to be very accurate and, as a bonus, they deliver nearly 100 percent weight retention.

Hunters today have a greater variety of top-quality factory ammunition available to them than ever before. No matter what or where you hunt, there's a cartridge loaded with the right bullet and load combination ideally suited for the task.

TIP: Hunters, is it time for you to give up the big guns? Check out this post about: Using smaller caliber rifles for aging hunters here.

Why does the chart show two rounds of 22lr with one of them labeled "22wmr"?

Thanks for the question,…

Here is what we found out...

About the .22 Long Rifle vs .22 WMR  blog is a good source to explain the difference.

If you're looking for a target or training rifle or plan on hunting small game like rabbits at 50 yards or less, the .22 Long Rifle is hard to beat when compared to the .22 WMR.

For Hogs I use the 350 Legend, it's a nice round low recoil, will take out most Hogs up to 150 yards easy. What do you think?

Your Ammunition chart is not accurate to scale.

Your Ammunition chart is not accurate to scale. A .300 Win Mag is longer than a 7mm Rem Mag.

Porro Prism or Roof Prism Binoculars: What is the Difference?